Exposure to asbestos can result a development of an aggressive disease. All of them is dangerous and deadly. A study conducted by Schapira RM, Ghio AJ, Effros RM, Morrisey J, Dawson CA and Hacker AD try to figure out the development of the disease in rats’ lungs. The study is entitled Hydroxyl radicals are formed in the rat lung after asbestos instillation in vivo. The study implicate hydroxyl radical (.OH) as a cause of lung injury following asbestos exposure. However, , there has been no demonstration of such generation in vivo despite in vitro evidence associating asbestos with .OH production. 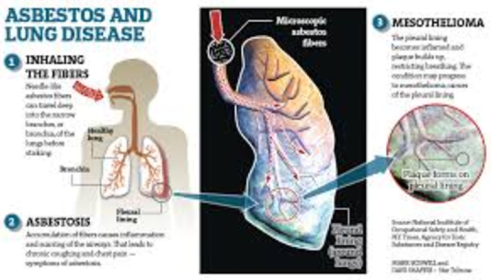 They tested the hypothesis by using salicylate as a free radical trap to proved that .OH is formed in the lungs of rats exposed to asbestos in vivo. Asbestos instills intratracheally and control rats are sham-exposed.  6 to 7 days after exposure, the rats were given salicylate, the lungs were isolated, and salicylate hydroxylation products, reflecting .OH production, were measured.

Another article worth looking at is written by Jones JS and friends, called “The consequences of exposure to asbestos dust in a wartime gas-mask factory”. The article talks about study of wartime gas-mask workers who were exposed to asbestos dust. The data showed that among those who worked with crocidolite there is a considerable excess of cases of mesothelioma. Also more modest excess of bronchial carcinoma, but no excess of any other type of malignant disease. The conclusion is cannot be based on the limited data available for the small number of people exposed to chrysotile for a maximum period of five months. The researches believe that the identification and measurement of fibres in autoptic lung tissue from patients with accurately known occupational histories of asbestos dust exposure is useful. For further info: https://www.asbestoswatchadelaide.com.au/

Another interesting article called Predictions of mortality from mesothelial tumours in asbestos factory workers by M L Newhouse and G Berry try to analyze the phenomenon by using accumulated data on deaths from mesothelial tumours. The data collected among cohorts of male and female factory workers at a London asbestos textile factory. And also the mortality from this cause up to the year 2000 AD has been predicted. It is found that the highest number of deaths from mesothelial tumours will occur during the 1980s. And after that the numbers will decline because of the decreasing size of the cohort resulting from general mortality.